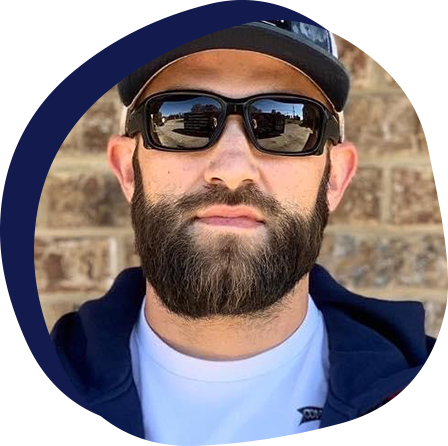 A streamlined payroll and time process

After Devin Hamrick left the U.S. Army, he had plans to open a gym designed for disabled veterans. When the shirts he ordered to promote the gym arrived with upside-down flags, he tore off the sleeves and gave them away to friends. The shirts were an immediate hit, so Hamrick put his plans for the gym on hold and leaned into the apparel business. In 2016, he launched Combat Iron Apparel, an e-commerce shop that sells workout clothes with patriotic imagery and tough, inspirational sayings. His business grew so fast that in 2020, he purchased a 10,000 sq. ft. facility on nine acres where he prints his own clothes and those of other local businesses, including churches, restaurants and police departments. Discover how ADP® helped Devin by offering simplified, streamlined processes to manage his payroll and time and attendance.

With ADP, my employees and I have much, much, much less stress. I would encourage anyone with a business like mine who was considering using ADP to go for it.

ADP vs. QuickBooks
Everything I’ve done here at the company has been trial and error. I’ve had no one who’s been there before to tell me what to do. At first, I was doing payroll on my own. But two years ago, I brought on ADP, because I had done my research and knew they were a reputable company.

About a year ago, I hired a bookkeeper who encouraged me to use QuickBooks for payroll. I wasn’t going to argue with her, because I figured she knew more than me. However, I quickly discovered they don’t have a great system or customer service. Tom would say it was Joe’s fault that our system wasn’t working, and Joe would say it was Bob’s fault, and Bob would say it was Tom’s fault.

Also, there was a problem with my payroll, and they told me it was just a small error—but it’s not small to my employees and their families. They need their money. So I ended up writing out checks and delivering them to my employees’ houses. Plus, it turned out they were charging me for services I wasn’t even using. My bookkeeper is still trying to get that money back.

After two weeks, I went to my ADP representative and asked if she could help me come back, and of course it was no problem. Now, I’m good to go.

Better customer service with ADP
ADP’s customer service is great. I have three or four ADP people in my email who always get back to me no matter what, whether or not they are the person who can handle the issue. I’ve never once been ignored or told, “I’ll email you back” and then not heard from them.

Once, there was an issue where payroll got taken out of my old bank account and I got hit with a negative balance fee. It was my fault, but ADP took care of it. Honestly, their service is always on par, and they’re always there when you call them. I never once had a bad call with ADP.

Small Business Success Stories: “I switched to ADP® from our local payroll provider”